Greg has a tree of nodes containing integer data. He wants to insert a node with some non-zero integer value somewhere into the tree. His goal is to be able to cut two edges and have the values of each of the three new trees sum to the same amount. This is called a balanced forest. Being frugal, the data value he inserts should be minimal. Determine the minimal amount that a new node can have to allow creation of a balanced forest. If it's not possible to create a balanced forest, return -1.

For example, you are given node values and . It is the following tree: 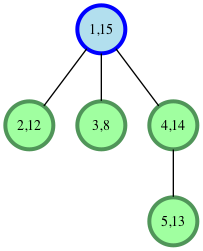 The blue node is root, the first number in a node is node number and the second is its value. Cuts can be made between nodes and and nodes and to have three trees with sums , and . Adding a new node of to the third tree completes the solution.

Complete the balancedForest function in the editor below. It must return an integer representing the minimum value of that can be added to allow creation of a balanced forest, or if it is not possible.

balancedForest has the following parameter(s):

The first line contains a single integer, , the number of queries.

Each of the following sets of lines is as follows:

For of the maximum score:

For of the maximum score:

For each query, return the minimum value of the integer . If no such value exists, return instead.

We perform the following two queries: 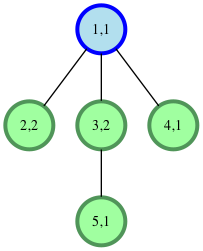 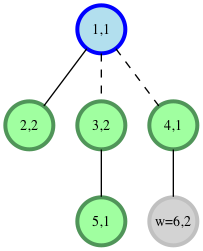