Alef the Frog is in an two-dimensional maze represented as a table. The maze has the following characteristics: 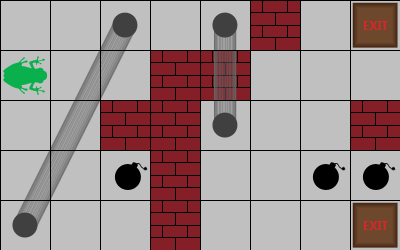 When Alef lands on a cell with an entrance to a tunnel, he is immediately transported through the tunnel and is thrown into the cell at the other end of the tunnel. Thereafter, he won't fall again, and will now randomly move to one of the adjacent cells again. (He could possibly fall in the same tunnel later.)

It's possible for Alef to get stuck in the maze in the case when the cell in which he was thrown into from a tunnel is surrounded by obstacles on all sides.

Your task is to write a program which calculates and prints a probability that Alef escapes the maze.

The first line contains three space-separated integers , and denoting the dimensions of the maze and the number of bidirectional tunnels.

The next lines describe the maze. The 'th line contains a string of length denoting the 'th row of the maze. The meaning of each character is as follows:

The next lines describe the tunnels. The 'th line contains four space-separated integers , , , . Here, and denote the coordinates of both entrances of the tunnel. denotes the row and column number, respectively.

Print one real number denoting the probability that Alef escapes the maze. Your answer will be considered to be correct if its (absolute) difference from the true answer is not greater than .

The following depicts this sample case: 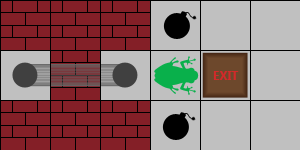 In this case, Alef will randomly choose one of four adjacent cells. If he goes up or down, he will explode and die. If he goes right, he will escape. If he goes left, he will go through a tunnel and get stuck in cell . So the probability of Alef escaping is .