Huffman coding assigns variable length codewords to fixed length input characters based on their frequencies. More frequent characters are assigned shorter codewords and less frequent characters are assigned longer codewords. All edges along the path to a character contain a code digit. If they are on the left side of the tree, they will be a 0 (zero). If on the right, they'll be a 1 (one). Only the leaves will contain a letter and its frequency count. All other nodes will contain a null instead of a character, and the count of the frequency of all of it and its descendant characters.

For instance, consider the string ABRACADABRA. There are a total of characters in the string. This number should match the count in the ultimately determined root of the tree. Our frequencies are and . The two smallest frequencies are for and , both equal to , so we'll create a tree with them. The root node will contain the sum of the counts of its descendants, in this case . The left node will be the first character encountered, , and the right will contain . Next we have items with a character count of : the tree we just created, the character and the character . The tree came first, so it will go on the left of our new root node. will go on the right. Repeat until the tree is complete, then fill in the 's and 's for the edges. The finished graph looks like: 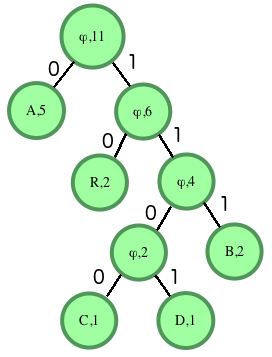 Input characters are only present in the leaves. Internal nodes have a character value of ϕ (NULL). We can determine that our values for characters are:

Our Huffman encoded string is:

To avoid ambiguity, Huffman encoding is a prefix free encoding technique. No codeword appears as a prefix of any other codeword.

To decode the encoded string, follow the zeros and ones to a leaf and return the character there.

You are given pointer to the root of the Huffman tree and a binary coded string to decode. You need to print the decoded string.

Complete the function decode_huff in the editor below. It must return the decoded string.

decode_huff has the following parameters:

There is one line of input containing the plain string, . Background code creates the Huffman tree then passes the head node and the encoded string to the function.

Output the decoded string on a single line. 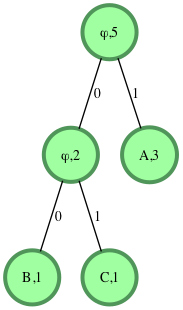