Terms you'll find helpful in completing today's challenge are outlined below, along with sample Java code (where appropriate).

This is an algorithmic concept that involves splitting a problem into two parts: a base case and a recursive case. The problem is divided into smaller subproblems which are then solved recursively until such time as they are small enough and meet some base case; once the base case is met, the solutions for each subproblem are combined and their result is the answer to the entire problem.

The code below produces the multiple of two numbers by combining addition and recursion:

When executed, this code prints:

The diagram below depicts the execution of the code above. Each call to is represented by a bubble, and each new recursive call bubble is stacked inside and on top of the bubble that was responsible for calling it. The function recursively calls itself using reduced values until it reaches the base case (). Once it reaches the base case, it passes back the base case's return value () to the bubble that called it and continues passing back k + the previously returned value until the final result (i.e.: the multiplication by addition result of ) is returned. 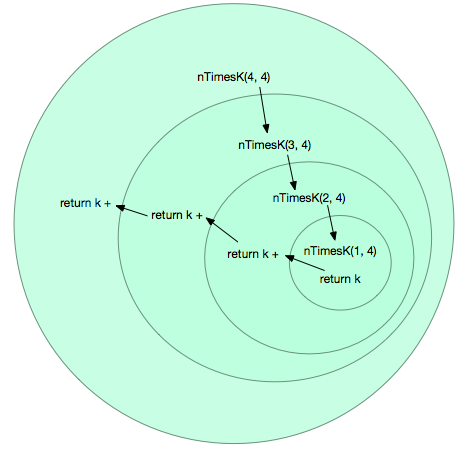