Let's talk about binary numbers. We have an -digit binary number, , and we denote the digit at index (zero-indexed from right to left) to be . We can find the decimal value of using the following formula:

For example, if binary number , we compute its decimal value like so:

Meanwhile, in our well-known decimal number system where each digit ranges from to , the value of some decimal number, , can be expanded in the same way:

This is a major problem because our new number system has no real applications beyond this challenge!

Consider an infinite list of non-negative decibinary numbers that is sorted according to the following rules: 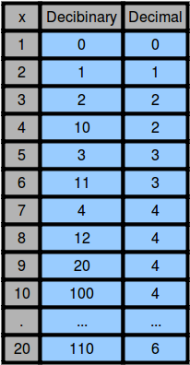 You will be given queries in the form of an integer, . For each , find and print the the decibinary number in the list on a new line.

Complete the decibinaryNumbers function in the editor below. For each query, it should return the decibinary number at that one-based index.

decibinaryNumbers has the following parameter(s):

For each , we print the decibinary number on a new line. See the figure in the problem statement.