We take a line segment of length on a one-dimensional plane and bend it to create a circle with circumference that's indexed from to . For example, if :

We denote a pair of points, and , as . We then plot pairs of points (meaning a total of individual points) at various indices along the circle's circumference. We define the distance between points and in pair as .

Next, let's consider two pairs: and . We define distance as the minimum of the six distances between any two points among points , , , and . In other words:

For example, consider the following diagram in which the relationship between points in pairs at non-overlapping indices is shown by a connecting line:

Print a single integer denoting the maximum , , where .

In the diagram below, the relationship between points in pairs at non-overlapping indices is shown by a connecting line: 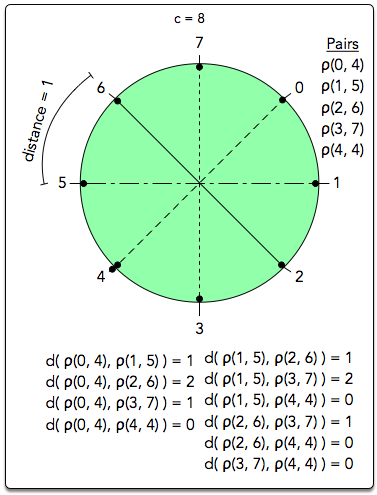 As you can see, the maximum distance between any two pairs of points is , so we print as our answer.

In the diagram below, we have four individual points located at three indices: 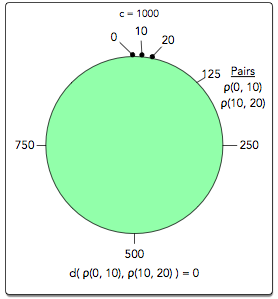 Because two of the points overlap, the minimum distance between the two pairs of points is . Thus, we print as our answer.