Detective Rust is investigating a homicide and he wants to chase down the murderer. The murderer knows he would definitely get caught if he takes the main roads for fleeing, so he uses the village roads (or side lanes) for running away from the crime scene.

Rust knows that the murderer will take village roads and he wants to chase him down. He is observing the city map, but it doesn't show the village roads (or side lanes) on it and shows only the main roads.

In this problem, distance is calculated as number of village roads (side lanes) between any two places in the city.

Rust wants to calculate the shortest distance from his position (Node ) to all the other places in the city if he travels only using the village roads (side lanes).

Note: The graph/map of the city is ensured to be a sparse graph.

For each of T test cases, print a single line consisting of N-1 space separated integers, denoting the shortest distances of the remaining N-1 places from Rust's position (that is all distances, except the source node to itself) using the village roads/side lanes in ascending order based on vertex number.

The graph in the first testcase can be shown as: 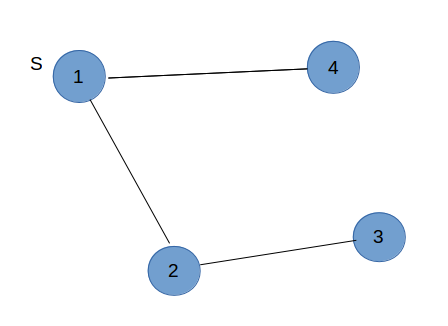