Chess is a very popular game played by hundreds of millions of people. Nowadays, we have chess engines such as Stockfish and Komodo to help us analyze games. These engines are very powerful pieces of well-developed software that use intelligent ideas and algorithms to analyze positions and sequences of moves, as well as to find tactical ideas. Consider the following simplified version of chess:

Given and the layout of pieces for games, implement a very basic engine for our simplified version of chess that determines whether or not White can win in moves (regardless of how Black plays) if White always moves first. For each game, print YES on a new line if White can win in moves; otherwise, print NO.

The first line contains an integer, , denoting the number of games. The subsequent lines describe each game in the following format:

For each of the games of simplified chess, print whether or not White can win in moves on a new line. If it's possible, print YES; otherwise, print NO instead.

We play the following game of simplified chess: 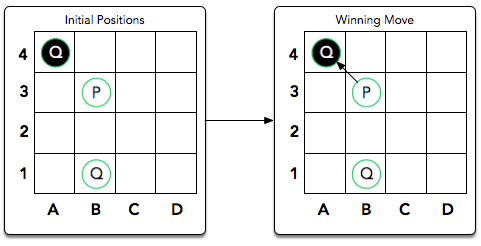 White wins by moving their Pawn to and capturing Black's Queen, so we print YES on a new line.