This problem is a programming version of Problem 253 from projecteuler.net

A small child has a “number caterpillar” consisting of forty jigsaw pieces, each with one number on it, which, when connected together in a line, reveal the numbers to in order.

Every night, the child's father has to pick up the pieces of the caterpillar that have been scattered across the play room. He picks up the pieces at random and places them in the correct order.
As the caterpillar is built up in this way, it forms distinct segments that gradually merge together.
The number of segments starts at zero (no pieces placed), generally increases up to about eleven or twelve, then tends to drop again before finishing at a single segment (all pieces placed). 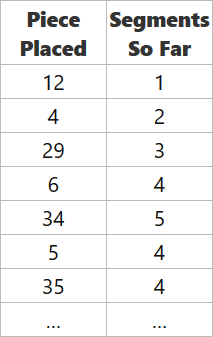 Let be the maximum number of segments encountered during a random tidy-up of the caterpillar.
For a caterpillar of ten pieces, the number of possibilities for each is 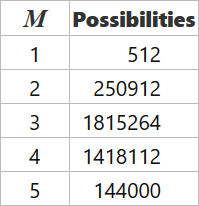 so the most likely value of is and the average value is , rounded to six decimal places.

The first line of each test file contains exactly two numbers separated by a single space, and .

Print exactly one number: the average value of modulo .

The only valid permutation allows only one segment of length .