Given an undirected graph and a starting node, determine the lengths of the shortest paths from the starting node to all other nodes in the graph. If a node is unreachable, its distance is -1. Nodes will be numbered consecutively from to , and edges will have varying distances or lengths.

For example, consider the following graph of 5 nodes: 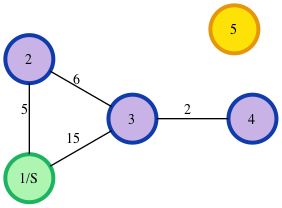 The distances to all nodes in increasing node order, omitting the starting node, are 5 11 13 -1.

Complete the shortestReach function in the editor below. It should return an array of integers that represent the shortest distance to each node from the start node in ascending order of node number.

shortestReach has the following parameter(s):

The first line contains , the number of test cases.


If there are edges between the same pair of nodes with different weights, they are to be considered as is, like multiple edges.

For each of the test cases, print a single line consisting space separated integers denoting the shortest distance to the nodes from starting position in increasing order of their labels, excluding .

The graph given in the test case is shown as : 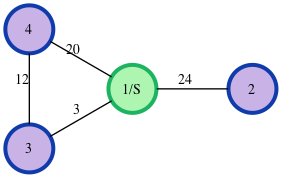 * The lines are weighted edges where weight denotes the length of the edge.

The shortest paths followed for the three nodes 2, 3 and 4 are as follows :