Alexa has two stacks of non-negative integers, stack and stack where index denotes the top of the stack. Alexa challenges Nick to play the following game:

Given , , and for games, find the maximum possible score Nick can achieve.


The maximum number of values Nick can remove is . There are two sets of choices with this result.

Function Description
Complete the twoStacks function in the editor below.

Returns
- int: the maximum number of selections Nick can make

The first line contains an integer, (the number of games). The subsequent lines describe each game in the following format:

The image below depicts the integers Nick should choose to remove from the stacks. We print as our answer, because that is the maximum number of integers that can be removed from the two stacks without the sum exceeding . 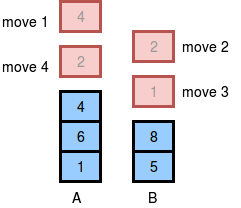 (There can be multiple ways to remove the integers from the stack, the image shows just one of them.)