Watson gave Sherlock a collection of arrays . Here each is an array of variable length. It is guaranteed that if you merge the arrays into one single array, you'll get an array, , of distinct integers in the range .

Watson asks Sherlock to merge into a sorted array. Sherlock is new to coding, but he accepts the challenge and writes the following algorithm: 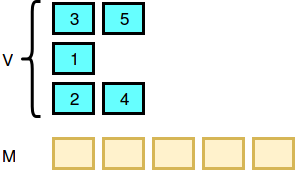 The image below demonstrates how Sherlock will do the merging according to the algorithm:

Sherlock isn't sure if his algorithm is correct or not. He ran Watson's input, , through his pseudocode algorithm to produce an output, , that contains an array of integers. However, Watson forgot the contents of and only has Sherlock's with him! Can you help Watson reverse-engineer to get the original contents of ?

Given , find the number of different ways to create collection such that it produces when given to Sherlock's algorithm as input. As this number can be quite large, print it modulo .

The first line contains an integer, , denoting the size of array .
The second line contains space-separated integers describing the respective values of .

Print the number of different ways to create collection , modulo .

There are four distinct possible collections:

Thus, we print the result of as our answer.

The only distinct possible collection is , so we print the result of as our answer.