Exactly two months ago, HackerRank hosted a coding challenge called Back to School and CodeSprint4 for the users of HackerRank. At the end of the challenge, users had an opportunity to apply to over 20 technology companies all with one application. This blog post is a snapshot of the most popular tech companies based on applications submitted to each company.
The following charts represent four cohorts that worked on these six programming challenges and applied to companies after the competition. Here are the three main data points:

1. Number of applications – At the end of the contest, applicants check off where they want to apply. This is the total for each company, ranging from applying to one or applying to all

2. Average score – Calculated by dividing the total number of applicants in each cohort by the total score of each cohort respectively

3. Companies – Companies that wanted to hire from our pool of applicants

Back to School (B2S)

B2S candidates consisted of US college students. US college students looking for an internship applied mostly to Dropbox, Twitter and Facebook. However, the blue spike in the graph below shows that Palantir Technologies attracted the highest scoring candidates from the Back to School intern pool. 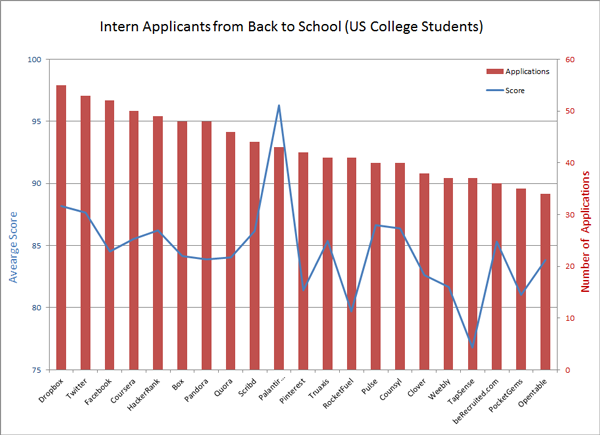 Range of company applications: 21 (more on this later)
For US college students looking for a full-time role, numbers were much less. This is most likely due to the timing of the contest, which occurred in the beginning of February 2013. By this time, most seniors already have a job waiting for them, either from summer internships between their junior and senior year or from starting their search Fall of 2012. On average, Quora attracted the highest scoring hackers in B2S who were seeking a full-time role. 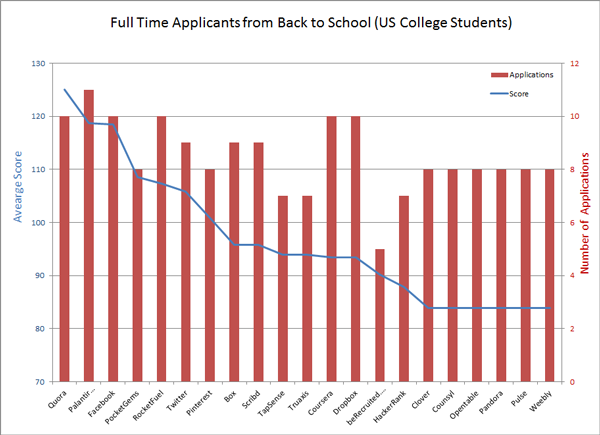 Range of company applications: 6
I predict that there will be a shift with more FT applicants than intern applicants when we do this again in late August/early September, since recruiting season will be in full bore.

CS4 applicants consisted of international candidates and non-US college students. This made for a more diverse field of applicants as well as a significantly larger candidate pool. Dropbox, Quora and Pinterest were the top three companies where CS4 candidates were looking for a full-time role.
Note that the average score for FT CS4 applicants is 50.22 vs. 96.77 for B2S FT applicants. You can come to your own conclusions on why this is the case and discuss it on Hacker News. 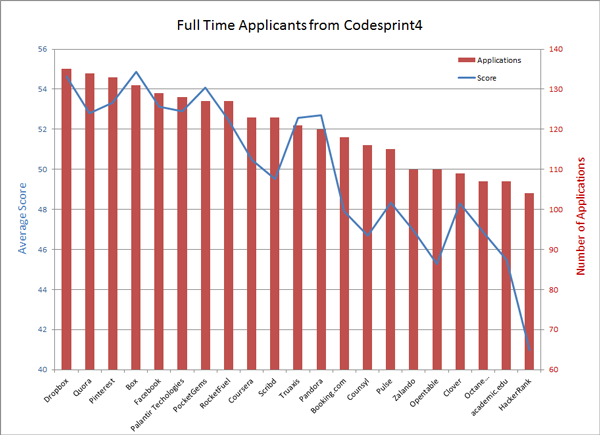 Range of company applications: 31
The top three companies where CS4 candidates were looking for an internship were Facebook, Dropbox and Quora. 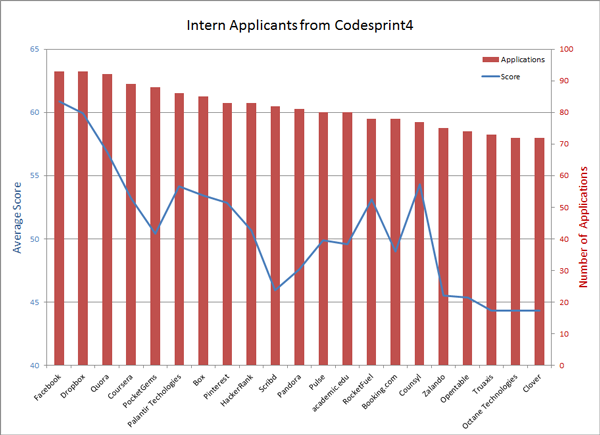 Range of company applications: 21
If you just look at the two CS4 cohorts you notice an interesting trend. Quora is in the top three of most applications received. According to LinkedIn, if you look solely at headcount, Quora has roughly 60 employees in comparison to companies that are 5 to 75 times bigger: Facebook (4,619), Twitter (3,040), Box (909), Palantir (798) and Dropbox (296). My hypothesis is that a majority of CS4 applicants came from India and Quora has 30.8% of their traffic from India. This makes for an interesting Venn diagram where two websites collide and create a Q&A/coding competition/hire me/Indian demographic.

For the people that slept through stats class, I calculated the range by subtracting the largest amount of applicants by the least amount of applicants for each cohort.
I swear I’m going somewhere with this…
We can leave out the cohort of B2S full-time candidates because the sample size is too small. But if you look at the two intern cohorts with a range of 21 and the CS4 cohort for full-time with a range of 31, you see a big difference. Full-time candidates were much pickier in applying to companies, hence the range of 31. The range for intern candidates was 10 points lower, meaning that most of them picked every company. This data leads me to believe that intern candidates were unsure of which companies to work for, opting to select through a shotgun style approach instead. There is a discrepancy between intern applicants and companies. For the most part, smaller companies have no chance of showing off their internship program, if they ever had one to begin with. So what can be done? How can HackerRank help?
Discussion on Hacker News
Please note that these are not all the participants of Back to School and CodeSprint4. A large amount of participants competed for fun and did not opt-in and apply to companies after the competition. HackerRank seeks to attract all types of hackers, not just ones who are looking for jobs.
P.S. Our first monthly contest will be live on April 10th with a chance to win cash prizes, click here to sign up and learn more about it.